Ulovane update: What is in a name?

Instructors Blog: How Ulovane Environmental Training got its name. 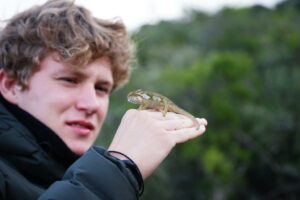 Names are important, without names the world would be a very confusing place. Imagine a world where nothing had a name; nothing had a place and nothing fit in anywhere. As humans, we like to put things into boxes and to live lives that are planned and managed, and organized (well, most of us anyway!)

When a baby is born one of the first things the mother and father would do is to give the newborn a name. There is usually much thought into this name because this name will stay with a person throughout his/her whole life. This name could be a family name that is carried over through generations OR this name has a special meaning for the couple.

ULOVANE is Xhosa for CHAMELEON. The name “Chameleon” comes from the word “khamai “on the ground” + chthon “earth” + leon “lion”.  (Perhaps the large head-crest on some species was thought to resemble a lion’s mane.)

It is believed that chameleons originated on the African continent and that they later spread to Madagascar, southern Spain, southern India, and the southern Arabian Peninsula.  Dwarf Chameleons are truly South African and their distribution is limited to small areas close to the coastline, and an inland group situated along the eastern escarpment. The Eastern Cape Dwarf Chameleon (Bradypodion ventrale) which is depicted on the Ulovane Environmental Training logo is thus truly exceptional in all aspects.

Chameleons have fascinating eyes – they are able to move their eyes independently from each other! Chameleons are the only Vertebrate family with this unique feature. That means that whilst one eye is focusing on something in front of the animal, the other eye can look at something behind the animal. For the company, this means that they can focus on the future but at the same time remember the past and all the lessons learned. The past should not be forgotten, because this is where we make mistakes and learn. Our eyes should focus on what we want from the future and where we want to be – we should keep our goals in front of us and live each day to the best of our capabilities.

The way in which a chameleon move is stable, firm, fixed, solid, and secure. Ulovane’s approach is as steady and deliberate as the chameleon’s movement. Each step taken is planned precisely whilst keeping the focus on the ultimate outcome for the students. The courses are designed in such a way as to not only train the students about the marvels of nature but also to help themselves realize their potentials as human beings and where and how we all fit into the bigger picture. We do not need to rush through life; the slower your approach the more time you put into the preparation of realizing your end results.

The chameleon’s uncanny ability to change color has long mystified people. How do these amazing creatures do it? Unlike other animals that change colors, such as the squid and octopus, chameleons do not modify their hues by accumulating or dispersing pigments within their skin cells. Instead, the lizards rely on structural changes that affect how light reflects off their skin. Chameleons have two superposed thick layers of cells that have pigment and reflect light. These cells are of different shapes, sizes, and organizations; which are key to the dramatic color changes in chameleons. The chameleon can change the structural arrangement of the upper cell layer by relaxing or exciting the skin, which leads to a change in color. For instance, a male chameleon might be in a relaxed state when it is hanging out on a branch, and in an excited state when it sees a rival male. When the skin is in a relaxed state, the crystals in the cells are very close together – hence, the cells specifically reflect short wavelengths, such as blue. On the other hand, when the skin becomes excited, the distance between neighboring crystals increases, and each cell selectively reflects longer wavelengths, such as yellow, orange or red. The chameleons’ skin also contains yellow pigments, and yellow mixed with blue makes green – a cryptic colour, which makes them masters of camouflage!!!

As the chameleon with its perfect camouflage fits into the environment, so does Ulovane blend into the environment. Ulovane Environmental Training strives to be a green company with the focus on living a more sustainable way of life. You will find that the focus of our trainers and staff is to try and reduce our impact on the environment and to instill that same passion and vision in you as students.

Today, it is by no means certain our society has the capacity to endure – at least in such a way that the nine billion people expected on Earth by 2050 will be able to achieve a basic quality of life. The planet’s ecosystems are deteriorating and the climate is changing. We are consuming so much, and so quickly, that we are already living far beyond the earth’s capacity to support us. To see a change in the world and to endure, we as a society must transform our markets – both how we produce and consume, and the very ways in which we define and measure value and progress.

The Cape Dwarf Chameleon is a symbol of unceasing transformation; balanced actions; courage and hope for the Ulovane family. As a student, you will experience a transformation during your time with us and leave here as part of the family. Come and experience it for yourself…

Twenty years from now you will be more disappointed by the things that you didn’t do than by the ones you did do, so throw off the bowlines, sail away from safe harbor, catch the trade winds in your sails.  Explore, Dream, Discover. –Mark Twain