Previously we have looked at the amazing diversity of relationships the Aardvark has with many animals. Animal species which are completely dependent on the Aardvark’s burrows for denning with their young include Spotted and Brown Hyena, Wild Dogs, Jackals, Bat-eared Fox, Porcupine, South African Shelduck, Ant-eating Chats and who knows how many other keys species of animals are dependent on the Aardvark to construct safe underground denning sites for their young.

But who would think that the Aardvark, who exclusively feeds on ants and termites, would have a close knit relationship with a plant? 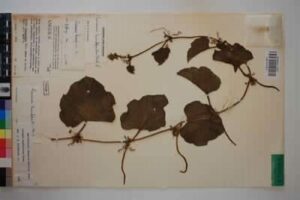 Strangely, Aardvarks are the only recorded animal to feed on the Aardvark Cucumber and are thus critical for its distribution. It is undisputed that, maybe unconsciously, the aardvark really supports the plant’s distribution.

Ironically it’s also the other way round as aardvarks don’t feed on any other Cucurbits or even any other plant and it is a mystery why Aardvarks only eat this Cucumber of ALL plants available. The dispersal and propagation of this Cucumber species is entirely dependent on this symbiotic relationship with the Aardvark. In areas where Aardvark numbers have declined this species rapidly disappear and become locally extinct. Aardvarks outside of reserves are threatened to become extinct because they are still hunted for medicinal use as well as bush meat.

The distribution of this Cucumber species is known from very old herbarium specimens and very few collections have been made in recent years. The Aardvark cucumber is an annual plant which grows as a trailing herb from 2 – 7 metres and only growing for three to four months of the year and it is suspected that the plant is rather an overlooked than a rare species. Historical records of this plant came from the Northern Cape, North West Province, Botswana, Limpopo and Mpumulanga. Today the only recent collections of this plant have come from the Waterberg and Northern Gauteng.

Another very strange factor is that Cucumis humifructus is the only species of Cucumber that is geocarpic. This means that the plant, after the flower has been pollinated and fertilized, start burrowing the fertilized flower 20 – 30 centimetres into the ground where the fruit is produced, without sunlight. Another well-known plant that does the same is the peanut / grondboontjie.

The Aardvark digs up and opens the fruit to eat the flesh and obtain the fruit’s water reserve which releases the seeds from the tough fruit covering. Aardvark has the peculiar habit of burying their faeces and with it the Cucumber seeds. Most Aardvark Cucumber plants are found in old Aardvark faeces sites or close to their den entrances. The nutrient poor Sandy soils where the aardvark cucumber occurs might result in the need for the seedlings to require additional nutrients and fertilizers provided by the aardvark dung. Keep your eyes open to see if you can find this remarkable species of plant to contribute to the research efforts of the Aardvark Cucumber.

Below is a typical toilet site of an Aardvark which is generally found on very well used animal paths. The animal’s tail was on the left and its head on the right of the picture. 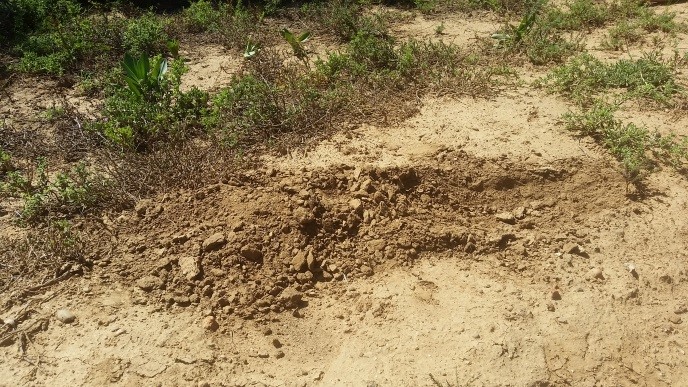 Below are two pictures of the Aardvark dung that was found in the above toilet site. One can clearly see the insect skeletons in the dung.

There will always be relationships in nature that we just don’t fully comprehend, unless we dig deeper. Schalk Pretorius (Director/Mentor/Instructor)