Kyla and Maddie were part of the maiden voyage of Ulovane’s new Online and Onsite course! Many things came out of 2020, and this was one great avenue added to the Ulovane platform. Kyla is here to share her story on their week with the other Apprentice Field guide students here in camp. 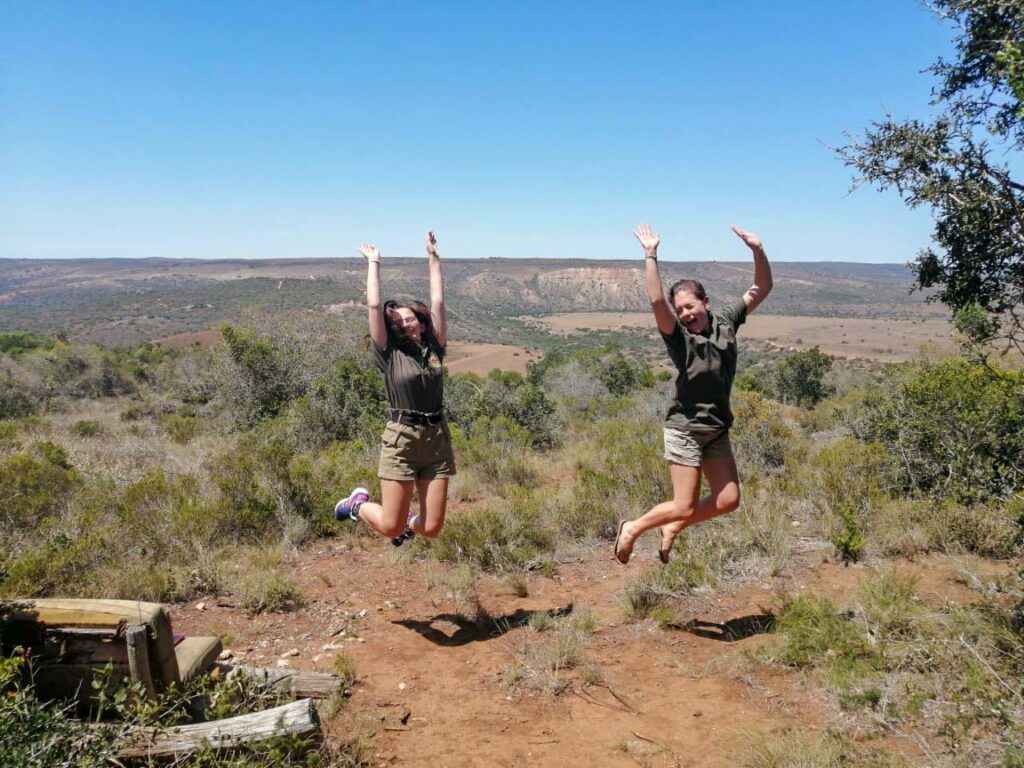 Our week began with a misty and drizzly Monday morning, on which we had Rhino Remembrance Day. We all got together with guests and staff from Amakhala Game Reserve and celebrated the memories of three rhinos, Isipho, Geza, and Chippy, who sadly were lost to poaching. It was a sad but eventful day.

We went on an early morning bird drive on Tuesday and we saw the mother, father, and the baby hippo swimming around in the only bit of water that is left in the section of the Bushman’s river that runs through Amakhala Game Reserve. I’ve never seen a hippo before, so it was pretty exciting to see a whole family at once! That afternoon we had lectures and we worked a bit on our knowledge about birds and reptiles. The rain poured so much that I thought that we were going to wash away and there was a thunderstorm as well which made things more interesting.
Halfway through our week, we did the bird slides which took the whole day. It was quite interesting even though my brain was fried at the end of the slides! Thursday morning everyone studied for their exams which were at 14:00 that afternoon and I think that we all were a bit stressed. The exams were actually not that bad, except I found Geology a bit difficult because it is not my strongest subject. We went on a night drive and saw a lot of animals, but what stood out for me was the Red Hartebeest and their babies. The babies are 2-3 weeks old and full of energy.
This week Friday and Saturday, we had Wilderness First Aid training with Doug Lang from Medwise Safety Services. It was interesting until there were slides of a thorn stuck in someone’s eye and a dislocated finger. I was completely grossed out but intrigued at the same time! It is a great way Doug teaches his course and trains us, as the things we learn are real and related to what could happen in our industry.
I think the most interesting thing that has happened to me so far in my time here, was finding camel spiders (also known as a Solifuge) running around that Schalk pointed out to us one very hot afternoon. This was the first time I’ve seen a camel spider in real life, and they are so cool even though they are not a spider, but they are still in the arachnid family! It was about 50 degrees that day when I saw them and I literally ran after them to catch one, but I underestimated how fast they were. It felt like I was running a marathon just trying to take one picture with my camera.
Kyla.

“Be fearless in the pursuit of what sets your soul on fire.” – Jennifer Lee

You last heard from Tim on the final update of his Apprentice Trails guide course, four weeks ago. Tim is from the Eastern Cape and has found marines to have been an eye-opener to the world we live in and our impact on it. Read on for his short story of week three of their course!

We started off our week with a trip to Riet River mouth, where we took a walk along the beach to explore the rock pools and surf zone of this beautiful part of the world where pretty much all of its natural beauty remains. We then wrote tests the following day on reptiles, amphibians, and conservation management. Later this week, we had classes on taxonomy and invertebrates to prepare us for our tests to come.

One of the biggest highlights of this week was being able to do a 7 km hike from Cannon Rocks, where we meandered through a section of the Woody Cape Section of Addo Elephant National Park. During our Apprentice Field guide course, I did my final presentation on my love and passion for hiking. This hike we did here, was a different experience from the other hikes I’ve done, like the ‘Otter trail’. The difference was mainly due to being able to identify birds, plants, and tracks of animals we came across. I found that it makes and enhances the experience as you become more in tune with nature and this is a result of our training at Ulovane.
It was a refreshing experience strolling through the dune forest surrounded by birds calling from all directions. We then returned to Riet River mouth to do a mock beach observation and to pick up plastic on the beach that pollutes our oceans. The marine course has certainly opened my eyes to the complexities of our oceans and the impact we have on the earth we inhabit.
Tim.

“The purpose of life is to live it, to taste it, to experience to the utmost, to reach out eagerly and without fear for newer and richer experience.” – Eleanor Roosevelt