Just like that, I knew this was the start of a beautiful thing!

Every journey starts with just one step.

My first week here at Ulovane Environmental Training for this 6-month journey I have started on has passed by like a snap of the fingers, and it’s hard to believe it. The warm welcoming I got when arrived feels like just yesterday!
It has been a hectic week but at the same time fun and interesting with all that is going on in the new environment, I currently call home.

We have been starting to get a grip of the history of the Amakhala game reserve and its surroundings but also what guiding really is and the importance of the interpretation we as people can learn from a guide or even from each other. It was a highlight and a lesson of life I have taken from this first week here.
On one of our game drives, we had the amazing opportunity to encounter one of my favorite animals. It was maybe 15 minutes after our coffee break, we had in the reserve with the sun slowly dispersing over the horizon, on the way back to our camp. In the thick bush that we had on both sides of the road, a crash of rhinoceros was on our left side and we got a good and close view of all of them in a gap between the bushes. They were grazing while we approached them but they were not bothered at all by our presence during the 10-15 minutes we were watching them. They are such iconic creatures and hoping that I see a lot more of them.

In general, it has been an absolutely fantastic first week, the guides, the staff, the food, and my fellow students which we all call ourselves a family now, are some of the best. We help take care of each other so that we all succeed and learn a bit more of ourselves on our journey towards the same goal as a field guide. The best of luck to my student group.
I am looking forward to this 6-month journey that we just took our first step in.

I arrived at Ulovane two weeks ago and had no idea what to expect. On my arrival, I was received with amazing hospitality and smiles where I was welcomed to my new home for the following 6 months. The first week went by so quickly I just could not believe that we are standing at the end of week two already. Come with me as I take you through these amazing two weeks of the apprentice field guide course.
The first week took a lot of blood, sweat, and tears as an enormous amount of work was piled on us which consisted of mostly classwork and long hours of studying. The second week was much more exciting. We had a few game drives at the start of the week where the students actually started conducting the guided experience ourselves.
The first game drive I had to conduct was nerve-racking. Something special happened on my drive, as we were driving, we heard on the radio there was an elephant on Woodbury flats, so we made our way there. The moment we got there the scenery was unbelievable. There was a massive very relaxed elephant bull feeding on the open plains. Whilst we sat there all sorts of different animals just rumbled in, from black wildebeest right through to rhinos all in one area. It was incredible to see the diversity nature has to offer in many different ways.

As we sat there the sun was starting to set behind the horizon, my mentor spotted two female lionesses approaching in the distance. We sat there just observing these incredible animals while they were preparing for their evening hunt. It was so amazing to see three out of the big five on one plain, it made me appreciate nature in a different way.
The highlight of the week was when we spent the night at bush braai where we slept amongst all these incredible animals. As we arrived at bush braai, we set up camp and started the fire. We then did a team-building exercise where we had to work together as a team with blindfolds to move a bottle from point A to B with only an elastic band and rope tied to the band. There was one teammate without a blindfold who guided us in what to do. When we finally completed the challenge, I realised that guiding isn’t just about what you see but also about what you can hear and that gave me a better understanding of how to fully connect with nature and understand the beauty and biodiversity of our surroundings.
We enjoyed a lovely meal cooked by some of the students. From there we were split into several groups who were responsible for night watch to make sure there is no unwanted guests disturbing us while we were sleeping. That was an exciting experience where you know you can walk into any animal at any time of night. Thanks to a lot of coffee and stories around the fire we managed to keep the whole group safe.

The next morning, we started to pack up camp and make our way back to the campus. One of the instructors implemented a thing that’s called golden hour where we were not allowed to talk for the first hour while everyone wakes up. You cannot believe how many birds and noises there are in the early morning. Through this exercise, I realised that it is not always about seeing big animals but rather to start appreciating the smaller things of nature to truly understand the bigger picture.
We made our way back to camp where we finished off the week with a FGASA meeting where they spoke about all the aspects of guiding how situations should be handled and to what extent a guide should go to conduct an unforgettable experience. 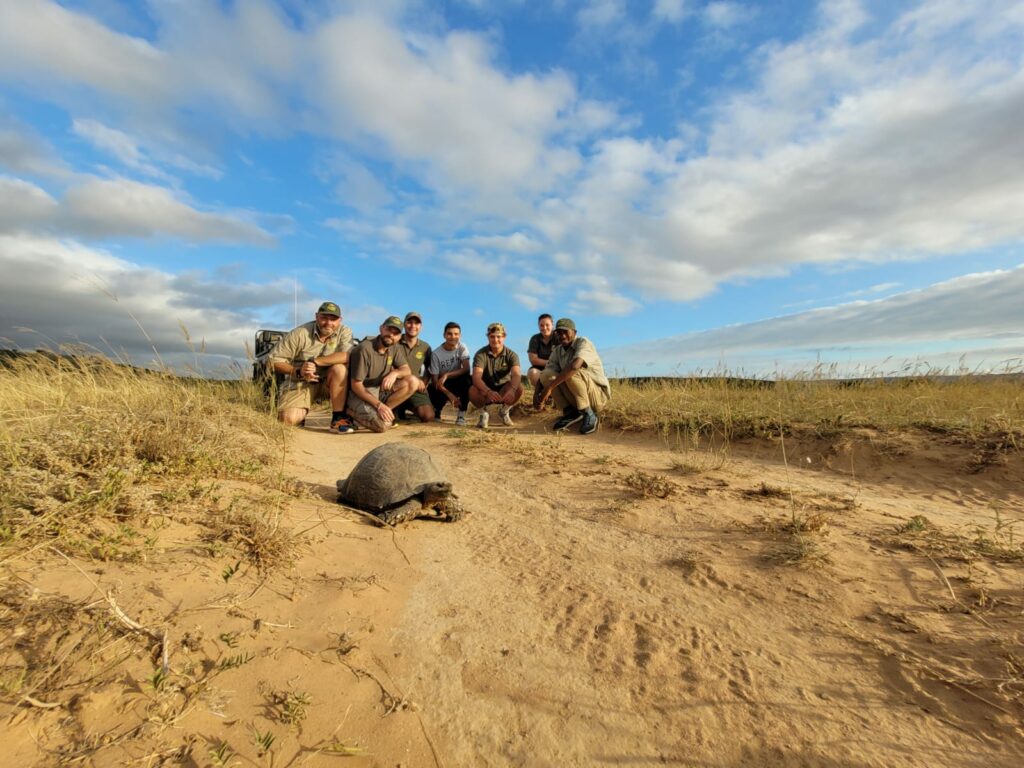 I believe that there is a subtitle magnetism in Nature, which if we unconsciously yield to it, directs us right ~Ruan